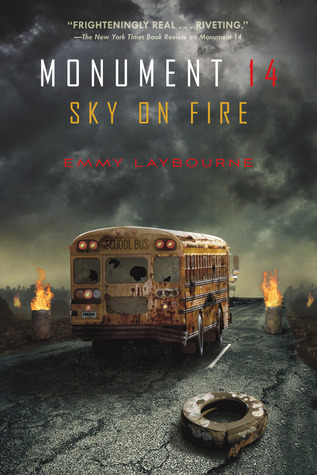 Release date: May 28, 2013  Series: Monument 14
Trapped in a superstore by a series of escalating disasters, including a monster hailstorm and terrifying chemical weapons spill, brothers Dean and Alex learned how to survive and worked together with twelve other kids to build a refuge from the chaos. But then strangers appeared, destroying their fragile peace, and bringing both fresh disaster and a glimmer of hope.

Knowing that the chemical weapons saturating the air outside will turn him into a bloodthirsty rage monster, Dean decides to stay in the safety of the store with Astrid and some of the younger kids. But their sanctuary has already been breached once. . . .

Meanwhile, Alex, determined to find their parents, heads out into the darkness and devastation with Niko and some others in a recently repaired school bus. If they can get to Denver International Airport, they might be evacuated to safety. But the outside world is even worse than they expected. . . .

EMMY LAYBOURNE, author of Monument 14, is a writer and actress. She has appeared in movies like Superstar and The In-Laws, and has performed original comedy on Comedy Central, MTV, VH1, and with UCB and Chicago City Limits. She lives in Upstate New York with her husband and their two children. Visit her online at www.emmylaybourne.com.

SOURCE: AROUND THE WORLD ARC TOURS

The group has survived intact so far with only minor injuries and have figured out how to counteract the chemical spill as well as fight off a few interlopers who would like to take over the superstore.  Alex and Niko decide that they can't sit around in the store forever and repair the bus to get to Denver International Airport where evacuations are taking place.  So with them, Batiste, Josie, Sahalia and Brayden who has been shot, all set off to get help in the bus.  As they travel through the interstate, the true horror of the catastrophe is even more than they could have imagined.  They are met by a group of marauding militia that tell them the airport is nothing more than a death sentence.  Still the group plod on.

Back at the store, Astrid and Dean try to keep the three youngest children happy and comfortable and they  think that they are safe, another refuge tries to break in and Jake reappears to save them.   As Jake describes the devastation outside, they start to gather supplies to make their own trek to the airport.  The air quality is deteriorating and they feel they have no other choice since everything seems to be getting worse.

The story again is full of action and perfect descriptions which make for a quick read. I admit I was a bit sad that it wasn't longer but I did get a lot of satisfaction for such a fast read.  The characters are more developed and I needed a book that wasn't a tortured romance -- although there is a bit of that between Astrid and Dean.  The ending left me hanging a bit and you do find out the fate of a few of them.  I am not going to ruin the outcome of this one since I know you will want to pick this one up.  Parents:  There is a bit of language and some kissing in this one, as well as some violence but it was nothing like the first one.