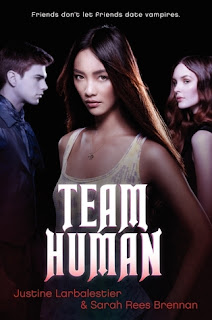 Publication Date: July 3, 2012
Just because Mel lives in New Whitby, a city founded by vampires, doesn't mean she knows any of the blood-drinking undead personally. They stay in their part of town; she says in hers. Until the day a vampire shows up at her high school. Worse yet, her best friend, Cathy, seems to be falling in love with him. It's up to Mel to save Cathy from a mistake she might regret for all eternity!
On top of trying to help Cathy (whether she wants it or not), Mel is investigating a mysterious disappearance for another friend and discovering the attractions of a certain vampire wannabe. Combine all this with a cranky vampire cop, a number of unlikely romantic entanglements, and the occasional zombie, and soon Mel is hip-deep in an adventure that is equal parts hilarious and touching.
Acclaimed authors Justine Larbalestier and Sarah Rees Brennan team up to create a witty and poignant story of cool vampires, warm friendships, and the changes that test the bonds of love.


About the Authors
JUSTINE LARBALESTIER is the author of Liar, How to Ditch Your Fairy, and the Magic or Madness trilogy, as well as the coeditor with Holly Black of Zombies vs. Unicorns. She and her husband, author Scott Westerfeld, divide their time between Sydney, Australia, and New York City.

SARAH REES BRENNAN was born and raised in Ireland by the sea. After college she lived briefly in New York and somehow survived in spite of her habit of hitching lifts in fire engines. Since then she has returned to Ireland to write and use as a home base for future adventures. Her Irish is still woeful, but she feels the books under the desk were worth it.


SOURCE: AROUND THE WORLD ARC TOURS


Welcome to New Whitby, home of the vampires who settled in America much like the Pilgrims and have created their own community along side normal humans.  Here, they don't sparkle, sunlight can kill them and rules are in place regarding the turning of humans into vampires since a mistake result in a zombie!  Mel is a studious, normal teen who begins to note that things aren't all right in her home town.  Her BFF, Cathy, has decided she want to be undead, her other friend, Anna, has been suddenly sent spiraling by her father's disappearance and worst of all, there is now a vampire in her her high school.  The worst of these of course is the vampire, who Mel, despises in a sort of contempt usually reserved for litterers.


Of course, you have your unlikely love matches, prejudices, and other high school pettiness but with vampires and zombies creating the issues as well as jocks / cheerleaders versus the nerds and geeks.  It points fingers at all the social injustices of bigotry but in a fun and sarcastic way.  Since the vampire, Francis, has started school, Cathy is drawn towards him and being a bit melancholy her whole life, falls in love with him and want to be turned.  Anna, the principal's daughter, has found that her psychologist father has just run away with one of his vampire patients.  All this leaves Mel searching for the truth of what actually happened to Anna's father and with the help of Kit (adopted by Francis as a baby) learns what love is and that her prejudice towards vampires is unfounded.  Oh and Mel tries to meddle in Cathy's life to keep her from turning Vamp, thereby losing her BFF, but not entirely.


Ahhh, how wonderful!  Finally, a book that pokes fun at all of the vampire teen angsty stories trolling around these days and written by two of my favorite authors. The story reminded me a bit of a snarky Nancy Drew and how there are all sorts of puzzles that Mel must solve in order to find out what vampires are really up to.  I adored the fact that Mel grows through each page and would love to read another installment of her adventures.  This one did end with a slight opening that might allow that.  If you enjoyed Meg Cabot's Insatiable, you are going to love this one!