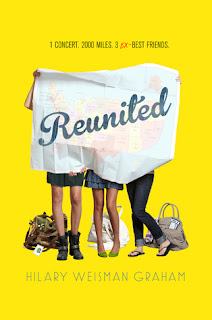 Publication Date: June 12, 2012
1 concert. 2000 miles. 3 ex-best friends.Alice, Summer, and Tiernan used to be best friends—as well as the self-proclaimed biggest fans of the band Level3. But when the band broke up, so did their friendship.
Now, four years later, they’ve just graduated from high school. When Level3 announces a one-time reunion show in Texas, Alice impulsively buys tickets and invites her two former friends along for the trip. Reluctant at first, both girls agree to go, each with her own ulterior motive. But old resentments and other roadblocks—from unintended detours to lost concert tickets—keep getting in the girls’ way. Will their friendship get an encore, or is the show really over?

Hilary Weisman Graham is an award-winning filmmaker and screenwriter. Reunited is her first novel. She lives in rural New Hampshire with her husband and son, roughly thirty minutes away from the nearest grocery store. Visit her at HilaryGraham.com.