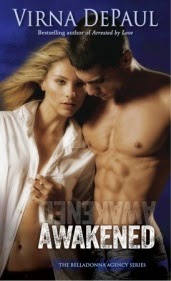 Perfect for fans of J. R. Ward, Nalini Singh, and Lara Adrian, New York Times and USA Todaybestselling author Virna DePaul’s thrilling series of paranormal romances invites readers into a seductive and dangerous world where vampires secretly exist among the general population, while the FBI tries to keep the Rogues among them from preying on humans—for killing, for turning, for pleasure.
Ex-soldier Barrett Miles had no idea that vampires were real—until Belladonna recruits her to serve as a covert agent and infiltrate a murderous sex ring run by the most depraved of immortals, those who feed on the purity and blood of innocents. Their latest victim: a young girl whom Barrett promised to protect. She will be sold—unless Barrett can find her first. Forced to team up with her former lover, Nick Maltese, an undercover sniper, Barrett is caught between fulfilling her personal mission and shielding her heart from the man who betrayed her.

Nick’s hunting a new breed of vampires and harboring a terrible secret when Barrett finds him. Soon a seething underworld of strange desires threatens to engulf them all. Can he save the girl and reclaim Barrett’s heart? Nick knows he has only one chance to prove himself to her as the hunt begins—and their love forces them to embrace the darkest places in their souls.

WANT TO WIN THIS AWESOME BOOK?

Open to anyone with a US mailing address - sorry no PO Boxes
Open only to those who can legally enter
Winning Entry will be verified prior to prize being awarded. No purchase necessary.
You must be 13 or older to enter .
The winner will be chosen by rafflecopter and announced here as well as emailed and will have 48 hours to respond or a new winner will be chosen.
This giveaway is in no way associated with Facebook, Twitter, Rafflecopter or any other entity unless otherwise specified.
The number of eligible entries received determines the odds of winning.
Giveaway was organized by BookHounds and sponsored by the publisher
VOID WHERE PROHIBITED BY LAW.