Review REPORT FROM THE INTERIOR by PAUL AUSTER @HenryHolt 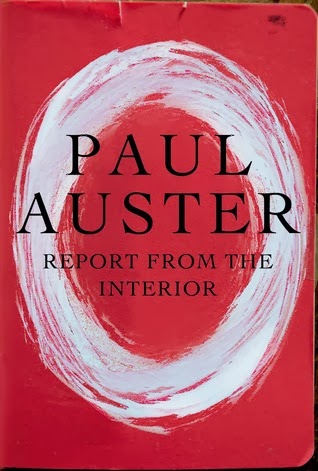 In the beginning, everything was alive. The smallest objects were endowed with beating hearts . . .


Having recalled his life through the story of his physical self in Winter Journal, internationally acclaimed novelist Paul Auster now remembers the experience of his development from within through the encounters of his interior self with the outer world in Report from the Interior.


From his baby’s-eye view of the man in the moon, to his childhood worship of the movie cowboy Buster Crabbe, to the composition of his first poem at the age of nine, to his dawning awareness of the injustices of American life, Report from the Interior charts Auster’s moral, political, and intellectual journey as he inches his way toward adulthood through the postwar 1950s and into the turbulent 1960s.


Auster evokes the sounds, smells, and tactile sensations that marked his early life—and the many images that came at him, including moving images (he adored cartoons, he was in love with films), until, at its unique climax, the book breaks away from prose into pure imagery: The final section of Report from the Interior recapitulates the first three parts, told in an album of pictures. At once a story of the times—which makes it everyone’s story—and the story of the emerging consciousness of a renowned literary artist, this four-part work answers the challenge of autobiography in ways rarely, if ever, seen before.

PAUL AUSTER is the bestselling author of Sunset Park, Invisible, Man in the Dark, The Book of Illusions, and The New York Trilogy, among many other works. His books have been translated into forty-three languages. He lives in Brooklyn, New York.

In this follow up to Auster's memoir, Winter Journal,  he continues his second person journey into his past.  Instead of more of the same, he goes more into what he was feeling while growing up and these feelings are something every baby boomer can relate to.  He has a fascinating take on the Kennedy assassination, growing up with movies and television.  Auster relates his first love, realizes that he is middle class, but not rich, and how his childhood has made him into what he is today.

This is a beautiful work, one that everyone can relate to in some way.  I think it will have more impact on the older generation since some of the memories are one that everyone shares that grew up in this time period.  The details come together much like one looks at a landscape, you notice the trees at first and then realize that there are flowers woven in.  It is all these little details that make up his life and make it so fascinating to read.  Anyone who loves memoirs, will enjoy this one.