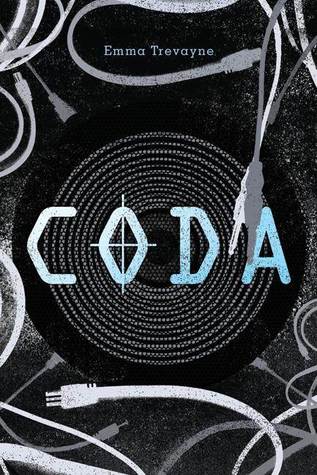 Ever since he was a young boy, music has coursed through the veins of eighteen-year-old Anthem—the Corp has certainly seen to that. By encoding music with addictive and mind-altering elements, the Corp holds control over all citizens, particularly conduits like Anthem, whose life energy feeds the main power in the Grid.

Anthem finds hope and comfort in the twin siblings he cares for, even as he watches the life drain slowly and painfully from his father. Escape is found in his underground rock band, where music sounds free, clear, and unencoded deep in an abandoned basement. But when a band member dies suspiciously from a tracking overdose, Anthem knows that his time has suddenly become limited. Revolution all but sings in the air, and Anthem cannot help but answer the call with the chords of choice and free will. But will the girl he loves help or hinder him?

Anthem lives in a post-apocalyptic New York, where music is used as a drug and the citizens are addicted to the sounds much like soma in Brave New World.  It keeps the population malleable and in line while keeping the rich in power and the poor as worker drones.  The world building happens quite quickly as you as dragged into a world that is both familiar and alien at the same time.  Anthem works as a human generator, using his life as a means to power the city and government and in turn he can support his family.  During his shifts, he reads old classic books which in turn inspire him.  Most people don't live past thirty and are kept in almost starvation like conditions.  I kept thinking that this could easily be happening today.

Anthem and his friends have started an illegal musical group, using instruments that they have fashioned themselves.  Only state authorized groups can actually earn a living with their music and that music in turn is made into drugs that cease pain, relieve depression but not quite cure any illness.  With his mother dead and his father dying, he tries to make a home for his twin brother and sister, keeping them from ever listening to the music that will also cause their early death.  With the help of Haven, not quite his girlfriend yet, he knows that she is above him in station and has more money than he can ever imagine.

As Anthem gathers his group, he also realizes that the manufactured music is killing people especially when his mentor, Johnny, is used as a warning and dies from an overdose right in front of him.  That incident forces Anthem to become a lightening rod for change and as he is taken down by the government, he uses his talent to spark a revolution.  Now, I was left with a bit of a cliffhanger at the end of this one.  Could these kids really spark a change in their condition?  There is a lot more to this story.


Emma Trevayne is a full-time writer. She is an avid music collector, a lover of computer code languages, and a photographer. She has lived in Canada, England, and America. Follow her onTwitter @EMentior.

Oh, boy. That’s longer ago than I’d like to admit. I think it was one of the Mr. Men books?

House of Secrets by Chris Columbus and Ned Vizzini.

It really doesn’t. I’m one of those people who is only good with cacti.

News on the Tour de France.

These were fun! Thank you!