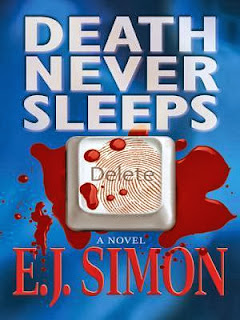 
DO THE DEAD HAVE SMARTPHONES?

The problem with Alex Nicholas is that he won’t stay dead.

Alex Nicholas was the consummate Queens bookie: fast cars and even faster women, and friends in all the wrong places. As an illegal sports betting and loan shark king in New York City, Alex was fearless—until the night his luck ran out and someone leveled the silver barrel of an automatic on him and pulled the trigger.

Michael Nicholas was everything his brother Alex was not: a powerful, married straight-arrow corporate CEO living the American Dream. Their two worlds collide when Michael discovers his brother’s secret laptop.

As Michael crosses the globe to find his brother’s murder, can he avoid his brother’s fate? And can the information contained in the laptop help Alex reach out to help Michael—from beyond the grave." 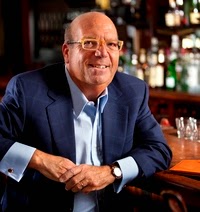 About the Author
E.J. Simon was the CEO of GMAC Global Relocation Services (a division of GM) and the managing director of Douglas Elliman, the largest real estate company in New York. He is a consultant to many leading private equity firms and has held senior-level positions at prominent financial services companies. He is a world traveler, food enthusiast and lives in Connecticut. DEATH NEVER SLEEPS is his first novel.

My Thoughts
Really Liked It

Michael Nicholas's life is turned upside down when his brother, Alex,  is murdered.  Not really close as adults, Michael must now take care of his estate and settle his debts.  This isn't as easy as it looks since it looks like his brother was not quite on the up and up and into a mobster named Sharkey  who wants almost a million - NOW!  This starts off as a murder-mystery but soon turns a bit sci-fi as Alex has equipped his Mac with a  program that lets him have a life after death.  This is really well done and is entirely believable.

The story is fast paced and takes you to some wonderfully described places as well as makes you a bit hungry with the food discussions.  The two main characters -- even with Alex now residing in a computer play off each other nicely.  I think I liked Alex better as intelligent life residing in the computer.  Michael is truly a corporate leader and thinker, use his analytic skills to unravel Alex's murder while Alex leads him on.  Overall, a very fun read and I would definitely read another by this author.

Ends 10/15/13
US only, no PO Boxes
Open only to those who can legally enter
Winning Entry will be verified prior to prize being awarded. No purchase necessary.
You must be 18 or older to enter .
The winner will be chosen by rafflecopter and announced here as well as emailed and will have 48 hours to respond or a new winner will be chosen.
This giveaway is in no way associated with Facebook, Twitter, Rafflecopter or any other entity unless otherwise specified.
The number of eligible entries received determines the odds of winning.
Giveaway was organized by BookHounds and sponsored by the publisher