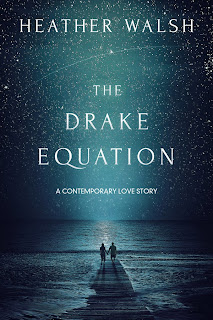 
She’s a Democrat, he’s a Republican. She spends her days fighting global warming at an environmental non-profit, he makes his living doing PR for Bell Motors and their fleet of SUVs. But as soon as they meet, Emily Crossley and Robert Drake realize they have encountered their intellectual match. You’re never challenged, he tells her. You’ve surrounded yourself in a cocoon of people who think exactly the same way you do. She hurls the same accusation back at him, and the fiery debates begin.

Despite both of their attempts to derail it, there is no denying that they are falling in love. But their relationship is threatened by political differences, Robert’s excessive work hours, and Emily’s fear of losing her identity as she falls deeper in love.

Can their love survive? The Drake Equation is a tale of modern love and all its complexities.

She noticed him first for his clothes. He was the only one in khakis
and a polo shirt—or not wearing sneakers, for that matter. She had
seen him watching her during the interview. Now he was scanning the
crowd, and because he was tall, it seemed like a natural movement for
him, the way someone else might casually scratch their nose. Emily was
not impressed. He struck her as one of those people who felt they were
deigning to even stand among hoi polloi. If there was one thing she
could not tolerate, it was arrogance.

But she noticed him next for his eyes. She had never seen eyes like
his. They were brown, which of course was nothing novel to her. Just
about everyone in North Prospect had brown eyes, except for the few
blue-eyed blondes who traded Most-Attractive yearbook ratings and
queen-of-the-dance crowns. But his were huge, these sunken-in eyes
that seemed to cut a swath across his face.

While her eyes were not as remarkable as his, Emily had always
considered them her best feature. There was nothing particularly
unattractive about her other features —she had her mother’s long,
elegant nose and her father’s wide mouth. But her eyes were hazel, and
she loved the way she could manipulate their color. It was a parlor
trick: watch, she would say. Hold something green or blue against my
neck and my eyes will turn green. And sure enough, the flecks of brown
would draw back as the green and yellows came forward, as if summoned.

She was purposely looking away, but she could tell he was coming to her.

“SUVs are the leading—” Emily said.

“Sure. You and your rally are in the almost real newspapers. That
makes you almost famous.”

“Carson, I think he’s making fun of our pre-coverage spread in the Gazette.”

“Why would anyone do that?” Carson said.

“Should I bring Joe back here? He could provide us with the impressive
stats of his paper: two sections, one purely grocery store ads,” Emily
said.

He extended his hand, but Emily reached over and picked up a pamphlet.
She pressed it into his palm.

“Well Robert, have a pamphlet on why you should give up your SUV for
preferably more than a day.”

“All right then. I think I’ll take one for my boss too.”

There was something lodged there in his sentence. Emily could smell
the bait, but she wasn’t certain if she should take it.

“Some overpaid executive at Bell Motors.”

Carson held up his hands. He slowly extended his two index fingers and
then crossed one over the other.

“I’m going to have to agree. If I had any holy water, I’d throw it in
your direction,” Emily said. She tried to sound insouciant to mask
just how much his answer had knocked her off guard. 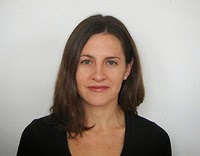 She received a B.A. in English at Mary Washington College, which has been renamed to, drum roll please... the University of Mary Washington. This was after a failed attempt to name it Washington & Monroe University, because there aren't enough schools honoring dead Virginian men already. Heather graduated Phi Betta Kappa and summa cum laude, which sounds kind of fancy but really means she took easy classes.
She taught high school English in Brooklyn for one year, where she loved the students but not the system. She then joined corporate America and worked there for too many years as an IT trainer, project manager, business analyst, and SQL dabbler (select * from Dented_Cans).

Her favorite writer is Alice Munro, her favorite movie is The Godfather Parts I & II (tied for first), and her favorite TV show is The Wire. She has lived in some pretty neat places, including Brooklyn (kind of before it was hipster-cool to do so), Manhattan, and San Francisco. The unfortunate result of living in these locations is that she has become an obnoxious foodie.
She currently lives in Brookline, MA with her husband, Mike DeLucia, and their two children.


WANT TO WIN A COPY OF THIS BOOK?


Ends 10/20/13
US only, no PO Boxes
Open only to those who can legally enter
Winning Entry will be verified prior to prize being awarded. No purchase necessary.
You must be 18 or older to enter .
The winner will be chosen by rafflecopter and announced here as well as emailed and will have 48 hours to respond or a new winner will be chosen.
This giveaway is in no way associated with Facebook, Twitter, Rafflecopter or any other entity unless otherwise specified.
The number of eligible entries received determines the odds of winning.
Giveaway was organized by BookHounds and sponsored by the publisher