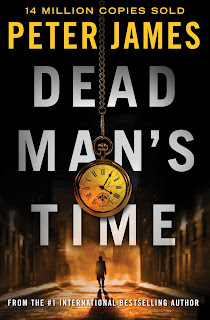 In Dead Man's Time, the latest from international bestselling author Peter James, Roy Grace finds himself up against that most dangerous of all adversaries—a man with fury in his heart who has nothing to lose.

New York, 1922. Five-year-old Gavin Daly and his seven-year-old sister, Aileen, are boarding the SS Mauretania to Dublin—and safety. Their mother has been shot and their Irish mobster father abducted. Suddenly, a messenger hands Gavin a piece of paper on which are written four names and eleven numbers, a cryptic message that will haunt him all his life, and his father's pocket watch. As the ship sails, Gavin watches Manhattan fade into the dusk and makes a promise, that one day he will return and find his father.

Brighton, 2012. Detective Superintendent Roy Grace investigates a savage burglary in Brighton, in which an old lady is murdered and £10m of antiques have been taken, including a rare vintage watch. To Grace’s surprise, the antiques are unimportant to her family—it is the watch they want back. As his investigation probes deeper, he realizes he has kicked over a hornets nest of new and ancient hatreds. At its heart is one man, Gavin Daly, the dead woman’s ninety-five-year-old brother. He has a score to settle and a promise to keep—both of which lead to a murderous trail linking the antiques world of Brighton, the crime fraternity of Spain’s Marbella, and New York.

Roy Grace, in a race against the clock to stop another killing, has met his most dangerous adversary yet.

Brooklyn, February 1922
The boy’s father kissed him goodnight for the last time – although
neither of them knew that.
The boy never went to sleep until he had had that kiss. Every
night, late, long after he had gone to bed, he would lie waiting
in the darkness, until he heard the door of his room open, and
saw the light flood in from the landing. Then the shadowy figure
and the sound of his father’s heavy footsteps across the bare boards.
‘Hey, little guy, you still awake?’ he would say in his low, booming
voice.
‘Yep, big guy, I am! Can I see your watch?’
His father would take out the watch from his pocket, and hold
it up by the chain. It was shiny, with a big, round face, and there
was a winder on the top with a hoop the chain was attached to. In
the top half of the face was a section that showed the phases of the
moon. The sky behind the moon was dark blue and the stars were
gold. Sometimes the moon was barely visible, just peeping
Other times it was whole, an ochre disc.
Every night the boy would ask his father to tell him a story
about the Man in the Moon. His father always did. Then he would
tousle his hair, kiss him on the forehead and ask, ‘You said your
prayers?’
The boy would nod.
‘You go to sleep now.’
Then his father would clump back out of the room and close
the door.
That’s how it was the very last time.

Peter James has been a screenwriter and film producer, and is now the author of best selling crime novels. James has written 25 books, the most recent of which feature Brighton-based Detective Superintendent Roy Grace. His books have been translated into 29 languages. In England they are published by Pan Books and in the US by Carroll & Graf Publishers. James has written supernatural thrillers, spy fiction, Michael Crichton-style science-based thrillers, and a children's novel, as well as the introductions for Graham Masterton's collection 'Manitou Man' and Joe Rattigan's collection 'Ghosts Far From Subtle'.

He also wrote, as 'a labour of love' the children's novelisation for the 1986 movie 'Biggles', which he also produced. James is a lifelong fan of the Biggles franchise, at one time owning the rights to the books, and having translated some foreign editions.


Want to win a copy of this book?

Ends 11/02/13
US only, Sorry, no PO Boxes
Open only to those who can legally enter
Winning Entry will be verified prior to prize being awarded. No purchase necessary.
You must be 18 or older to enter .
The winner will be chosen by rafflecopter and announced here as well as emailed and will have 48 hours to respond or a new winner will be chosen.
This giveaway is in no way associated with Facebook, Twitter, Rafflecopter or any other entity unless otherwise specified.
The number of eligible entries received determines the odds of winning.
Giveaway was organized by BookHounds and sponsored by the publisher
VOID WHERE PROHIBITED BY LAW.