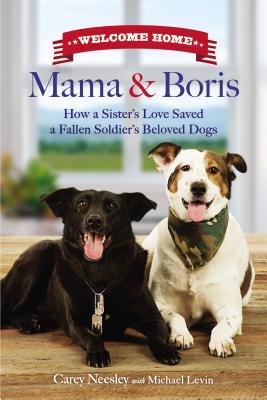 Book Description
Publication Date: August 29, 2013
Growing up in the well-heeled Detroit suburb of Grosse Pointe, Michigan, Carey Neesley always thought she and her younger brother, Peter, would never be separated. The children of divorced parents and outcasts in their neighborhood, Carey and Peter supported, loved, and encouraged each other when it seemed no one else cared.
It was a bond that grew through the years, and one that made Peter’s eventual decision to enlist in the Army all the more difficult for Carey. With Peter having stepped up to help her raise her young son, Carey was closer than ever to her brother, and the thought of him serving far from home was painful.
While stationed in Iraq, Peter befriended a stray dog and her four puppies, only to watch three of the young pups die in the warzone. With only two surviving dogs—Mama and Boris—Peter became determined to save the strays. Carey helped her brother with his mission, but everything changed on Christmas Day in 2007 when word arrived at the Neesley household that Peter had been killed.
Amidst the grief of coming to terms with her brother’s death and the turmoil of trying to plan his funeral, Carey devoted herself to bringing Peter’s dogs home to the U.S. It was the final honor she could pay to her brother and a way of keeping a piece of him with her. With the help of an unlikely network of heroes, including an animal rescue organization in Utah, a civilian airline, an Iraqi family, and a private security contractor with military connections, Mama and Boris mad the journey form the streets of Baghdad to Carey’s suburban house.
Carey’s mission garnered widespread attention and requests from other soldiers for help in bringing home dogs they had become attached to on deployment, and she continues to work with organizations dedicated to bringing home wartime strays.

Carey Neesley
A hospice social worker with a Master’s Degree from Wayne State University, Carey Neesley has a very rewarding career in which she sees both the best and the worst of human nature.
Her story has been covered on television (ABC World News, NBC Nightly News, Fox News, CNN, MSNBC, and the Associated Press), in print (The Washington Post, USA Today, AKC Gazette, MSNBC Field Notes, and many other local and national publications), on the internet, (Examiner.com, Detroit Regional News Hub, Hyer Standard, The E & P Publishers, Animal Planet star “Good Dog U” Joel Silverman- Companions For Life, and Greg Mitchell’s website), and on NPR for Melissa Block’s “All Things Considered.”

Raising her son, Patrick, in the same home where she grew up in Grosse Pointe, MI, Carey still mourns her brother but hopes that through her work with animals in warzones she can help give his memory the honor it so greatly deserves.

ABOUT READER’S DIGEST
RDA is a global media and direct marketing company that educates, entertains and connects more than 130 million consumers around the world with products and services from trusted brands. With offices in 43 countries, the company reaches customers in 78 countries, publishes 91 magazines, including 50 editions of Reader’s Digest, the world's largest-circulation magazine, operates 78 branded websites and sells 40 million books, music and video products across the world each year. Further information about the company can be found at www.rda.com.

Carey and Peter grew up in Grosse Point, MI, in a working class neighborhood and when their parents divorced, they became outcasts.. The bond between brother and sister grows even deeper after this and the pair always stick together.  Peter helps Carey raise her son and helps her complete college.  Peter decides that he wants to serve his country and enlists in the Army.  Once in Iraq, he finds a dog with four puppies but only two of this family survive. leaving just Mama and a pup he names Boris.  By this point in the book, tears are streaming down my face.  I adore books like this even when they make me cry.

It gets worse when Carey gets word that Peter has died in his sleep on Christmas Day --- more tears for me.  They have shared the bond he had with these two wonderful pups by keeping in touch by Internet and in order to find closure for herself over his death, she starts a trek to bring them back to the US.  With the help of local rescue groups, a US Senator, the Michigan Governor along with many others help Carey bring these dogs home.  It is with much relief for me that she actually accomplishes this mission impossible


WANT TO WIN A COPY OF THIS BOOK?
US ONLY

Ends 9/10/13
Open only to those who can legally enter
Winning Entry will be verified prior to prize being awarded. No purchase necessary.
You must be 13 or older to enter .
The winner will be chosen by rafflecopter and announced here as well as emailed and will have 48 hours to respond or a new winner will be chosen.
This giveaway is in no way associated with Facebook, Twitter, Rafflecopter or any other entity unless otherwise specified.
The number of eligible entries received determines the odds of winning.
Giveaway was organized by BookHounds and sponsored by the publisher.
VOID WHERE PROHIBITED BY LAW.