Holly
I’m in that lovely space between consciousness and sleep. I feel no pain thanks to the morphine pump and I can almost believe that the muscles, tendons and skin of my left arm have knitted themselves back together, leaving my skin smooth and pale. 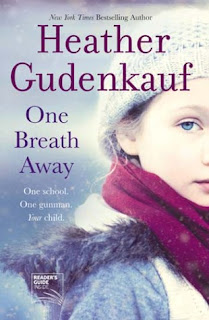 Publication Date: June 26, 2012
In her most emotionally charged novel to date, New York Times bestselling author Heather Gudenkauf explores the unspoken events that shape a community, the ties between parents and their children and how the fragile normalcy of our everyday life is so easily shattered.

In the midst of a sudden spring snowstorm, an unknown man armed with a gun walks into an elementary school classroom. Outside the school, the town of Broken Branch watches and waits.
Officer Meg Barrett holds the responsibility for the town's children in her hands. Will Thwaite, reluctantly entrusted with the care of his two grandchildren by the daughter who left home years earlier, stands by helplessly and wonders if he has failed his child again. Trapped in her classroom, Evelyn Oliver watches for an opportunity to rescue the children in her care. And thirteen-year-old Augie Baker, already struggling with the aftermath of a terrible accident that has has brought her to Broken Branch, will risk her own safety to protect her little brother.
As tension mounts with each passing minute, the hidden fears and grudges of the small town are revealed as the people of Broken Branch race to uncover the identity of the stranger who holds their children hostage.

Heather Gudenkauf is an Edgar Award nominated, New York Times and USA Today bestselling author.  Heather lives in Iowa with her husband and children. In her free time Heather enjoys spending time with her family, reading, and running.
SOURCE: PUBLISHER
MY THOUGHTS
ABSOLUTELY LOVED IT

Told in five different points of view, this story about an armed assault in a school, will really take your breath away.  When a lone, unknown gunman invades a classroom at a local school in Iowa, the police converge to rescue the children and their teacher when they are trapped.  Holly has sent her two children to live with her father after an while she is in the hospital recovering from burns and she swore she would never see him again.  Augie, her teen daughter has escaped but remains behind to rescue her little brother and shows courage beyond her years.  Will, father and grandfather, has only one thing in mind: find Augie and PJ and not worry their recovering mother.  Mrs. Oliver, the teacher, almost ready to retire, relies on her years of experience, tries to keep the gunman from harming her children.  Meg, a police officer, now requested to appear by the gun man, tries to figure out who this man is and how she can save the children.

As their stories intertwine, a portrait of the man holding them hostage is painted with bare brush strokes.  It takes almost the whole book to find out exactly who he is and why he has done this horrible deed.  Although he is briefly mentioned at the beginning of the story, you will have a hard time connecting the dots until that very end.  I was ripping through this book in order to find out the answer and then had to go back to see if I missed any clues!  Meg and Mrs. Oliver became the true focus of the story and I admire the tenacity and fortitude of these women to think clearly in a devastating situation.  The man responsible seemed to have a history of wrong thinking (putting that mildly) but you won't know that until the very end.  Even after I put this book down, I still thought about his motives and if his actions were created from sort of mental defect.  If you are a fan of Jodi Picoult, you are going to love this tightly knit drama.