REVIEW: Dead is a Battlefield by Marlene Perez @marperez 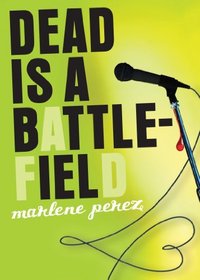 Publication Date: March 6, 2012 | Series: Dead Is
Jessica Walsh is starting her freshman year at Nightshade High and trying to forget
about the tragic events surrounding her brother’s graduation. She wants to have a normal high school experience. But that’s easier said than done in Nightshade.
There’s a new guy at school who seems to be turning the girls into lovesick zombies.
And Jessica has other worries—like her crush on a cute but moody lead singer,
and the mysterious tattoo that appeared on her arm one day that lets her know whenever there is trouble brewing. Jessica learns she’s a Virago, a woman warrior chosen to fight evil whenever it threatens her hometown. But does a lowly freshman really have what it takes to keep Nightshade safe?

Marlene Perez is the author of seven books in the Dead Is Series, in including Dead Is The New Black, an ALA Quick Pick for Reluctant Young Adult Readers. She lives in Orange County, California. Visit her website at www.marleneperez.com.


I have to admit I don't remember Jessica from the previous books in the series, but I will never forget her now!  Jessica grew up next door to Daisy Giordano and her boyfriend Ryan is her older brother Sean's best friend.  Jessica didn't think she had anything in common with the other paranormals living in Nightshade but that all starts to change when a tattoo like mark appears on her arm.  Flo from the diner immediately recognizes Jessica as a Virago, a chosen female warrior that battle all sorts of evil.  So, YEAH!  Girl Power!  As Jessica begins to realize her powers, a new store opens up on Main Street called the Look of Love and all sorts of things start to go wrong when a few of the girls in Jessica's freshman class start to follow the owner's son with cult like obsession.  Which leaves Jessica no choice but to find her backbone and fight for her friends. There is also some musical influence going on here as well, with the band Side Effects May Vary getting a new singer that becomes Jessica's crush.


I knew that the story of the Giordano girls was at an end since the last book has Daisy, the youngest, going off to college.  I can see now that there is a whole new set of sisters with Jessica now in play.  I think there are six girls in the Walsh family so maybe there will be at least that many more books to go.  Maybe this is wishful thinking on my part, but I can hope!  I know there is at least one more book to come, Love is Killer Tune due in September, 2012, and I hope some of the minor characters are developed further like the hunky new lead singer, Dominic.  This series is one of my favorites to recommend to younger teens that tell me they hate to read.  They are quick and easy with just the right amount of excitement.  They are also very acceptable to parents. This is definitely a series worth seeking out if you want to enjoy yourself for a few hours.