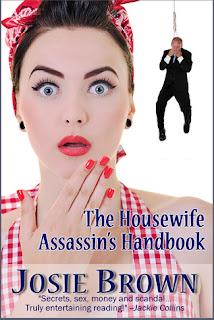 Murder. Suspense. Sex. And some handy household tips.Every desperate housewife would love an alias. Donna Stone has one, and it's government sanctioned. Oh sure, you need to be ruthless to take on Russian mafia bosses, rogue dictators, and terrorists set on destroying the world. But it takes real killer instincts to survive suburbia. Try juggling the fifth grade phone tree during a shootout with skinhead arms dealers, or driving carpool while being chased by Chinese double agents.Donna’s life wasn’t always this complicated. Five years earlier she was just another woman with two preschoolers, a baby bump, and an adoring husband: Carl, with whom she lived happily ever after in a McMansion in the Orange County, California community of Hilldale. But Donna’s life was changed forever the night she delivered her baby: Carl’s car blew up on the way to the hospital.Turns out Carl was an assassin for a black ops organization known as Acme Industries. The hit on Carl was carried out by the Quorum, a terrorist cell he was tracking. The Quorum’s motto: “Show me the money.” Governments do as they’re told—or suffer bloody consequences.Carl left something behind that the Quorum wants badly. To protect herself and avenge Carl’s death, Donna joined Acme. Whereas her hostessing skills rival Martha Stewart’s, her marksmanship is second to none.A good thing, too, because the Quorum has planted a sleeper cell in Hilldale. For Donna, that’s too close for comfort. Will she be able to save her family before the Quorum blows up Los Angeles?Acme’s way of flushing out the Quorum is by “bringing Carl back from the dead.” But terrorism makes strange bedfellows--and brings new meaning to that old adage “Honey, I’m home…”

You can check out the first chapter on Goodreads HERE

SECRET LIVES OF HUSBANDS AND WIVES (Simon & Schuster), which will be made into a dramatic television series for ABC by producer Jerry Bruckheimer.

Donna thinks her husband has a normal job that includes a LOT of travel but it affords her the life  she has always dreamed of and then Carl is declared dead while she is at the hospital delivering her third child, she finds out exactly what his job entailed as an assassin.  When the money runs out from his job, she finds out the strange truth about what Carl actually did and is drawn in a world of espionage and  terrorists.  I guess being a mother prepares you for coordinating attacks and being vicious and you can ask anyone who has ever been involved in the PTA.  She is hired by Acme Industries as an operative to help counteract the activities of the Quorum and other slime.


So when Donna's "husband" returns to her life, it turns out to be Jack, another Acme operative that wants to use her as a front.  She tries to get to the bottom of exactly what happened to her husband.  There are more twists and turns in this plot than Mulholland Drive and if you have been in the car with me, just as fast!  Her partner in crime is now Jack but Donna can't exactly figure out which side he is on and every time she thinks she has the answer it is wrong.  This is a super sexy and fun read that you shouldn't miss!


How do I love this book, let me count the ways:


1. A kick ass woman that can literally kick ass as well as cook and clean.  Donna gives a whole new meaning to "taking out the trash".


2. The book is set around Los Angeles, mostly in a gated community suspiciously like Coto de Caza, full of housewives that could be 'real" and for the setting alone, a big giant WIN!


3. Super Sarcasm, snarky dialogue and making fun of all that is wrong in the OC, politics, as well as current world affairs.


THIS BOOK IS FREE OVER ON AMAZON
UNTIL MONDAY, MAY 31!