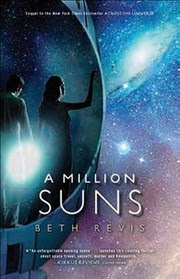 Series: Across the Universe | Publication Date: January 10, 2012
Godspeed was fueled by lies. Now it is ruled by chaos.

It's been three months since Amy was unplugged. The life she always knew is over. And everywhere she looks, she sees the walls of the spaceship Godspeed. But there may just be hope: Elder has assumed leadership of the ship. He's finally free to enact his vision - no more Phydus, no more lies.

But when Elder discovers shocking news about the ship, he and Amy race to discover the truth behind life on Godspeed. They must work together to unlock a puzzle that was set in motion hundreds of years earlier, unable to fight the romance that's growing between them and the chaos that threatens to tear them apart.

In book two of the Across the Universe trilogy, New York Times bestselling author Beth Revis mesmerizes us again with a brilliantly crafted mystery filled with action, suspense, romance, and deep philosophical questions. And this time it all builds to one mind-bending conclusion: They have to get off this ship.

Beth Revis (www.AcrosstheUniverseBook.com) is the New York Times bestselling author of the Across the Universe trilogy. A Million Suns is her second book. Beth lives in rural North Carolina with her husband and dog, and believes space is nowhere near the final frontier.

Never in a million years would I ever think a book about a spaceship, revolution and love would keep me up at night still thinking about a story that probably shouldn't work. I mean a sixteen year old girl that is frozen for 300 hundred years on a spaceship with her parents to go to a new planet  and is brought back to life because some kid thinks she has pretty hair and is lonely?  Elder, the guy who wakes her up early, is the soon to be leader of the spaceship, but this romance really shouldn't work out and it pretty much doesn't because the girl, Amy, thinks for herself.   I think I read this in about 6 hours while staying up too late because I just couldn't put it down. There are some serious page turning moments that come one after another.

I read a LOT of science fiction as a teen but NEVER anything like this, probably because back in the early 70's no one thought girls should be reading science fiction.  There were similar plot lines about space travel, utopian societies but they mostly had adult males as the main characters. so what a treat this story is for me in that I get to read a young adult novel about all of my favorite things with some romance thrown in!  You are drawn so quickly into this new world, it really should exist and that is the best part of how wonderfully Revis writes.

This follow up to Across the Universe picks right up where it ends with Amy and Elder alternating chapters and viewpoints about the spaceship Godspeed and how each generation has been told that they are 50 years away from landing on the new planet that will be their home.  After living in this closed environment, the inhabitants  have been drugged to keep them obedient and complacent in order to avoid a revolution that occurred on the ship ages ago called the Plague.  History of the ship has been rewritten into one that follows a party line to keep the peace on board.  Orion, himself a proposed leader and now the Recorder (librarian) knows the truth about the ship but is frozen himself. when the revolution on the ship begins once the people stop receiving the drugs.

The story is almost like a puzzle, with Amy finding clues left by Orion where she uses her intelligence and wit to find answers while Elder tries to lead the people to the truth.  The truth is pretty shocking once Amy finds the details and puts everything together.  I thought the relationship between Elder and Amy would just naturally blossom into a romance but there are lots of twists and turns that may surprise you along the way.  The secondary characters like Orion, Doc, Victria and Bartie each add something to the plot which add a bit of sinister malevolence.  Now, I can't wait until the next one!

Email ThisBlogThis!Share to TwitterShare to FacebookShare to Pinterest
Labels: Around the World ARC Tours, Beth Revis