Dexter:  Current age: 16 months, but he’s 4 months in this picture

Web Address: www.stephaniechong.com
Social networking links:
Facebook: www.facebook.com/StephanieCChong
Twitter: www.twitter.com/stephaniecchong
Do you have another book in the works?
My second novel, The Demoness of Waking Dreams, will be out in 2012.  It’s the continuation of my “Company of Angels” series, and there’s a third book planned, too.
What are you reading right now?
Kathryn Stockett’s The Help; Karen Marie Moning’s Bloodfever
How many books a year do you read?
A lot – I can’t even guess!  It varies from year to year.  I was reading an enormous number of books when I was doing a Ph.D. in Comparative Literature and a Master’s in Creative Writing (simultaneously, separate programs at separate schools), until I finished both those degrees in 2009.
What does your dog like to do while you write or read?
Dexter goes to the dog beaches and dog parks for sessions with a dog training/exercise company during the day.  At home, he has a favorite place in the living room front window where he likes to sit for people- and dog-watching.
What is your dog’s favorite activity?
Playing with his dog friends.


Be sure to pick up Stephanie's book:
WHERE DEMONS FEAR TO TREAD!
It is a wonderful read! 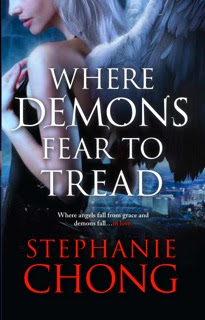 About the book:
Fledgling guardian angel and yoga teacher Serena St. Clair dares enter Devil’s Paradise nightclub on a mission – to retrieve the wayward Hollywood “It Boy” she’s assigned to protect.  But she’s ambushed by the club’s owner, Archdemon Julian Ascher.  The most powerful demonic entity in Los Angeles, Julian is handsome as sin, a master of temptation who loves nothing more than corrupting pleasure-seeking humans.  He won’t release the lost soul Serena is supposed to guard.  Unless she accepts his dangerous wager…
After the disastrous way his human life ended, Julian vowed that no woman would get the better of him again.  Yet this sexy-sweet angel, smelling of fresh ocean air and happiness, triggers centuries-old feelings.  Now, their high-stakes game of seduction, where angels fall from grace and where demons fear to tread, will lead them either to an eternity in hell…or a deliciously hot heaven.
About the author:
Stephanie worked as a lawyer at a top-tier Canadian firm and completed five university degrees before landing her dream job: romance novelist.  Her degrees include a J.D. and a Ph.D. from the University of Toronto, and a Master’s in Creative Writing from Oxford University.
When she’s not writing, Stephanie enjoys yoga, traveling and outdoor adventures.  She lives in Vancouver with her husband and their pug, Dexter.
at 8:20 AM