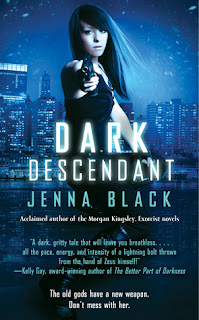 From the acclaimed author of the Morgan Kingsley, Exorcist books comes the gripping first novel in a new series about a private eye who discovers, to her surprise, that she’s an immortal huntress. Nikki Glass can track down any man. But when her latest client turns out to be a true descendant of Hades, Nikki now discovers she can’t die. . . . Crazy as it sounds, Nikki’s manhunting skills are literally god-given. She’s a living, breathing descendant of Artemis who has stepped right into a trap set by the children of the gods. Nikki’s new “friends” include a descendant of Eros, who uses sex as a weapon; a descendant of Loki, whose tricks are no laughing matter; and a half-mad descendant of Kali who thinks she’s a spy. But most powerful of all are the Olympians, a rival clan of immortals seeking to destroy all Descendants who refuse to bow down to them. In the eternal battle of good god/bad god, Nikki would make a divine weapon. But if they think she’ll surrender without a fight, the gods must be crazy. . . .

Jenna Black is a typical writer, which means she’s an “experience junkie.” She received B.A. degrees in physical anthropology and French from Duke University. She once dreamed of being the next Jane Goodall, until she realized that primates spend eighty percent of their time not really doing anything. She moved on to such pastimes as grooming dogs and writing technical documentation before creating the popular Morgan Kingsley urban fantasy series and The Guardians of the Night paranormal romance series. She lives in North Carolina.

Nikki is a private investigator specializing in skip traces and missing persons and she is exceptionally good at her job.  Nikki's own history is brought to the front of the story when she accidentally kills her client while trying to help him save the person Nikki was hired to find from a cult.   While badly injured she is met with more injury from  one of the "cult" members upset that she has killed his best friend.  This turns out to be no ordinary "cult" and is instead the descendants of mythological gods and goddesses from all cultures.  You will be quickly sucked into this world where there are both good and evil descendants and Nikki is trying to figure out which she should align herself with.

This is a quick read and I finished it in one night!  The story really moves fast and there is no lack of action and it is nicely woven with Nikki's back story.  She had been abandon as a child and is taken in by a wealthy family, but feels guilty about their money and doesn't touch her trust fund.  The fact that she has no interest in money. provides some great plot points for the story so far.  Another interesting point is the members of the group she has taken up with.  Anderson, who no one can figure out, sets her on a personal investigation to find his missing wife and let Nikki prove her worth.  There are lots of interesting characters that I think will provide great tales to come.