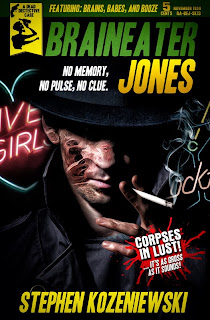 
Braineater Jones wakes up face down in a swimming pool with no memory of his former life, how he died, or why he’s now a zombie. With a smart-aleck severed head as a partner, Jones descends into the undead ghetto to solve his own murder.


But Jones’s investigation is complicated by his crippling addiction to human flesh. Like all walking corpses, he discovers that only a stiff drink can soothe his cravings. Unfortunately, finding liquor during Prohibition is costly and dangerous. From his Mason jar, the cantankerous Old Man rules the only speakeasy in the city that caters to the postmortem crowd.

Cracking this case is a tall order. Braineater Jones won’t get out alive, but if he plays his cards right, he might manage to salvage the last scraps of his humanity. 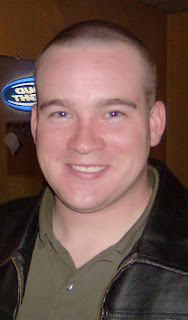 About the Author
Stephen Kozeniewski lives with his wife of 9 years and cat of 22 pounds in Pennsylvania, the birthplace of the modern zombie. He was born to the soothing strains of “Boogie With Stu” even though The Who are far superior to Zep, for reasons that he doesn’t even really want to get into right now. During his time as a Field Artillery officer, he served for three years in Oklahoma and one in Iraq, where due to what he assumes was a clerical error, he was awarded the Bronze Star. The depiction of addiction in his fiction is strongly informed by the three years he spent working at a substance abuse clinic, an experience which also ensures that he employs strict moderation when enjoying the occasional highball of Old Crow. He is also a classically trained linguist, which sounds much more impressive than saying his bachelor’s degree is in German.

Possibly THE MONSTER AT THE END OF THIS BOOK? I’m pretty sure the first novel I read was A STUDY IN SCARLET.

THE MAGUS by John Fowles. Oh, and I guess I started ANGLE OF REPOSE by Wallace Stegner last night because I was bored with THE MAGUS. Oh, and I’m listening to NATIVE SON by Richard Wright in the car. Oh, and I’m also halfway through WINGS OF THE DOVE by Henry James on my iPhone.

“How does your garden grow?”

Being told Zep is better than The Who.

As a junior grade diving tech and executive producer with mail-order degrees in both zombology AND zombonomy, I often receive questions in my inbox such as “Who are you?” and “Get off of my lawn?”  As such, when the lovely folks at Bookhounds asked me to write a guest post, my first thought was naturally, “What'd I do?  Is it all my fault?"  Then my second thought was, “Ah, a perfect opportunity to fob off answering some of these e-mail questions as a guest blog.”  Only, don’t tell Mary that.  To wit:

Dear Stevesie,
What is your favorite tea?

Aloha, Stevesie!
What do you do when the dishwasher stops?

Love and Kisses,
Poi-Lover Under the Sun in Hawaii

Hmmm, that’s a good one, Tim.  This may even require more than my usual flip response.

Whenever I’m asked a question about zombies my first clarifying response is, “Under which mythos?”  This usually elicits a blank stare, so I’ll simply spell it out: not all zombies are created equal.  Sad, but true, that in 2013 in these United States some walking corpses simply have more rights than others, but that’s just the world we live in.

In the absence of a specific fictive universe within which to work, I usually take this tack: address a few of the bigger and more significant zombie universes (to include reality if appropriate) then try to triangulate out a general rule.

The baseline fictional zombie universe would be that of the Holy Trilogy: Night of the Living Dead, Dawn of the Dead, and Day of the Dead.  (And Land of the Dead, Diary of the Dead, and Survival of the Dead, but let’s not worry about those right now.)  For short, we’ll just call these Romero zombies, after the director of the lot of them, Pennsylvania’s native son and creator of the modern zombie, George A. Romero.

While it’s impossible to prove a negative, there is no direct evidence in any of these movies that whatever it is that reanimates the dead affects animals.  (No, I am not going to attribute the zombie apocalypse to Venusian radiation.  That was simply a wild guess made by the in-universe media and has been discredited by the creator.)  That being said, we DO see an alligator in the beginning of Day of the Dead.  Although sluggish, there is nothing to explicitly suggest that this is meant to be a reanimated animal.  Furthermore, logic would suggest that the deer heads on display in the gun shop in Dawn of the Dead would reanimate.  Assuming their brains were not destroyed, which seems evident, there is no time limit on reanimation.  In the absence of other evidence, and since no character says explicitly otherwise, we must conclude that in the Romero Universe, all zombie animals, and therefore by extension, zombie dogs are fiction.

For the sake of not making this be a boring list where I simply tick off each universe where zombie dogs are not mentioned and therefore cannot be confirmed, let’s move on to a universe where I happen to KNOW that zombie dogs CAN and DO exist.  I refer, of course, to the immortal (ha!) Resident Evil series of triumphant video games and execrable movies.

In Resident Evil, as a blanket rule, the T-virus which reanimates the dead makes no bones (ha!) about what, specifically, it reanimates.  In fact, in the very first game, and, therefore, from the dawn of the franchise, we see zombified dogs of a breed I cannot readily identify since I know almost literally nothing about dogs.  They’re pachyderms, right?  I think they might be Snausages, but that’s about the best guess I can make.  So, this one is easy.

Moving on, interestingly, usually the second fictive universe I go with when answering these sorts of questions is the Return of the Living Dead franchise, or, again naming them after their creator, Russo zombies.  I say this is interesting because I didn’t want to follow on a fiction with a fiction, but I just had a sudden recollection.

In point of fact, in the very first Return of the Living Dead movie, when Frank and Freddy first release the canister of Trioxin 2-4-5, a split dog in the medical warehouse they are working in comes to life and begins barking and attempting to run.  So, come to think of it:

I feel obliged, as this is a literary blog, to throw in at least one book here.  If you haven’t read Brian Keene’s The Rising, or its sequels City of the Dead and Dead Sea, you’re missing out.  But the reason that this jumps to mind as being so informative here, is that the Siqqusim are a unique race of demons in that they possess the bodies not only of humans, but also of animals and even plants.  So there are explicitly zombie animals all throughout The Rising.

Let me hit one more fictional universe just to even things out.  Without getting too technical about the name, Zombie directed by Lucio Fulci (aka Zombie Flesh Eaters, aka Zombi 2, aka Woodoo…you get the idea) features a scene that should be telling, the legendary zombie vs. shark duel.  In this instance we see a zombie bite and defeat a shark while underwater and yet we so no evidence later of a zombie shark.  No zombie sharks implies no zombie animals and therefore this one seems pretty straightforward.

So, now it comes down to brass tacks.  What about the real world?  I don’t always address the real world, despite our thousands-year long history of revenants and reanimated corpses occurring in almost every culture since the dawn of time.  (Probably because of that one dog that dug up a skeletal hand in prehistoric Africa - look it up - but I digress.)

In “researching” (read: googling) this subject I came across some rather disturbing articles from 2005 stating that apparently researchers in Pittsburgh (yeah, same place Night of the Living Dead was filmed - go figure) actually clinically killed and re-animated dogs in a laboratory setting.  What, exactly, was the scientific purpose of these experiments?  Aside from the stock response, “because we can,” I’m going to go with…bloody-mindedness?  Nevertheless, in what you will probably find the most shocking of my conclusions, when it comes to zombie dogs:

Well, kids, it seems like there’s no real contest in this question.  Based on my triangulation of hand-picked fictive universes and the kind of disturbing real-world experiments, I’d have to say that zombie dogs are a disturbing FACT.

You can send me more “Ask Stevesie” questions on Twitter:  https://twitter.com/outfortune

And you can purchase BRAINEATER JONES, my thrilling new book which features dogs AND zombies (but, sadly, no zombie dogs) at any of these fine retailers: