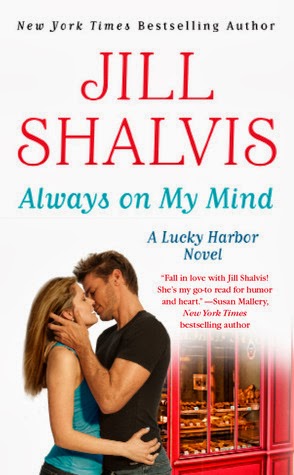 THERE'S NOTHING LIKE THE REAL THING
After dropping out of pastry school and messing up her big break on a reality cooking show, Leah Sullivan needs to accomplish something in her life. But when she returns home to Lucky Harbor, she finds herself distracted by her best friend, Jack Harper. In an effort to cheer up Jack's ailing mother, Dee, Leah tells a little fib - that she and Jack are more than just friends. Soon pretending to be hot-and-heavy with this hunky firefighter feels too real to handle . . .

No-strings attachments suit Jack just fine - perfect for keeping the risk of heartbreak away. But as Jack and Leah break every one of their "just friends" rules, he longs to turn their pretend relationship into something permanent. Do best friends know too much about each other to risk falling in love? Or will Jack and Leah discover something new about each other in a little town called Lucky Harbor?

He stared at her. “That’s quite a list of shortcomings,” he eventually said. “Is that all?”
“No.” She shoved her wet hair from her face, though she managed to keep her regal stance, nose firmly in the air at nose-bleed height. “I held back because I didn’t want to be overly rude.”
He laughed softly. “Don’t hold back, Leah. Let’s hear all of it.”
“Well, your truck has more sporting goods than a store, you never say you’re sorry, and your girlfriends look like supermodels. I mean, what is that? There’s nothing wrong with real boobs, you know!”
“I fail to see the problem.”
She snorted again, and he was starting to feel greatly insulted. “You’re not exactly a walk in the park, Leah.”
“No?”
“No. You’re flighty, you live for your every whim, you downplay any real emotion you feel.”
She hugged herself tight. “Good thing this is all pretend then, isn’t it,” she said softly.
“Yeah.”
She was freezing. And hauntingly gorgeous, so damn gorgeous standing there wet and silvery by the moon’s glow, like a goddess. It’s Leah, he had to keep reminding himself. Leah, who’d once beaten him in a marshmallow-eating contest, only to puke all over him. Leah, whose dark-green eyes had a way of telling the world to bite her. Leah, who’d run off on him and left him heartbroken. He took a step into her—for what exactly, he had no idea—and she poked a finger into his chest.
“God,” she said. “You’re so…” Words apparently failed her, but she let out a sound that managed to perfectly convey how annoying he was.
“Ditto,” he said, and then grabbed the finger drilling a hole between his pecs and tugged her hard enough that she lost her balance and fell against him.
He wrapped an arm around her waist, entangling a hand in her wet hair.
She went still as stone and stared into his eyes. And then lowered her gaze to his mouth.
Yeah, they were in sync there. Suddenly he couldn’t breathe. Hers caught audibly in her throat, a good sign, he decided. Maybe she wouldn’t knee him in the balls. Testing the waters, he grazed her jawline with his teeth.
She shivered.
Then he slid his mouth to the very corner of hers and was rewarded by the clutch of her hands on his shirt. Having her hold on to him like this, like he was her only anchor, sent a bolt of lust straight through him. “Leah,” he murmured, hearing the surprise in his own voice, feeling the heat course through him as he finally—God, finally—covered her mouth with his.
Her lips parted for him eagerly, and he groaned, drowning in the erotic collision of her hot tongue and chilled, wet body.
Serious trouble. He was in serious trouble.

Leah Sullivan grew up in Lucky Harbor with a domineering father and a mother who allowed him to bully her, so as soon as she could, she left and never looked back. Drifting aroung and never finishing school, she does succeed as a pastry chef so when her aunt has to have surgery, she comes back home to help out in her bakery.  She has competed on Sweet Wars, a televised reality baking show, which will have you rooting for her much like the people who live in Lucky Harbor to win.  Her best guy friend growing up, Jack Harper has remained an ally with Leah but there has never been anything more than sworn friendship, even though the sparks are present.  And considering, he is now head of the fire department, you know this is going to lead to a blaze of hotness.  (I know, for some reason these books bring out the puns in me.)

Oh, and Jack's mother is fighting breast cancer, so when Joe brings Dee into the bakery to tempt her to eat, Leah blurts out that they are now seeing each other which makes Dee overwhelmingly happy.  Jack figures something that makes his mother snap out of her depression is a wonderful thing and decides that he doesn't really want to lie to his mother so he gives it his all.  Even the little details like Leah's friends and their snarky comments all ring true.  Those girls have cornered the market on hot firefighter cliches!  I love reading about how Leah, with the help of Jack just makes everything come together.  It also wouldn't be a true "Jill" book without a bit of mystery and conflict.  In this case, it is a strange building fires around the small community.


The situation that Leah creates with one little white lie is so believable that everything just falls together so naturally in this story.  Every time I pick up one of Shalvis's books, I keep wondering if this will be the one that lets me down and every time I adore that one more than the last.  I instantly get sucked into the characters and the winning dialogue with just enough detail that isn't overwhelming or sticky sweet.  (ok, sorry, more puns).   So dig in, grab a glass of wine, or in my case water, and read this charming story. 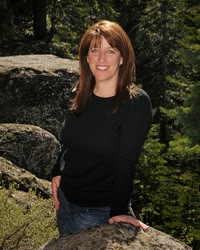 About the Author
New York Times bestselling author Jill Shalvis lives in a small town in the Sierras full of quirky characters. Any resemblance to the quirky characters in her books is, um, mostly coincidental. Look for Jill's bestselling, award-winning books wherever romances are sold and visit her website for a complete book list and daily blog detailing her city-girl-living-in-the-mountains adventures.


WANT TO WIN A COPY OF THIS BOOK?

Ends 10/5/13
US only, no PO Boxes
Open only to those who can legally enter
Winning Entry will be verified prior to prize being awarded. No purchase necessary.
You must be 18 or older to enter .
The winner will be chosen by rafflecopter and announced here as well as emailed and will have 48 hours to respond or a new winner will be chosen.
This giveaway is in no way associated with Facebook, Twitter, Rafflecopter or any other entity unless otherwise specified.
The number of eligible entries received determines the odds of winning.
Giveaway was organized by BookHounds and sponsored by the publisher