Excerpt from THE DUCHESS HUNT
by Jennifer Haymore

They stood there, in the center of the room, staring at each other. The depths of his dark green eyes held her in his thrall, so heavy with the weight of the world, and at that moment, she wanted to wipe it all away—the pressures of Parliament and government and his position. Worries about his sister... and his mother.
“I wished it had been me,” she said softly. “When you were dancing with Miss Stanley and the others. I wished you were dancing with me.”
He gazed at her unspeaking for a moment. Then he said, “I did, too.”
He stepped forward, wrapped his arms around her, and pressed his lips to hers.
The feel of him, of their lips gliding against each other, sent fireworks exploding through her. She dragged him harder against her, heard his ragged whisper, “Sarah.”
Their lips moved in a hot, sensual slide. His hand rubbed tight circles over her lower back . . . and lower, un- til he cupped her bottom, pulling her against him so the hard ridge of his arousal pressed against her abdomen. The feel of it, of that most primitive, masculine part of him, sent a carnal shudder racing through her.
His mouth moved down her chin, and she kissed his rough cheek, then tilted her neck as he moved her braid aside with his free hand to kiss her there.
His lips pressed against her jaw, then caressed the shell of her ear before kissing their way back to her mouth, seeking, exploring.
Sensation washed over her. Not only in the places his mouth touched, but all over and through her. Deep yearn- ing. Longing. Need.
She gave a small whimper, clutched him tighter, kissed his bare, warm skin wherever her mouth could reach him. She wanted more. So much more.
His arousal grew, pressed against her lower belly, so hard and so hot she could feel the heat between the layers of their clothes.
His hand moved from her neck to the opening in her robe, cupping her breast over her nightgown, his thumb running over her nipple, hardening it into a sensitized nub that strained against the fabric of her chemise.
She pressed her body tighter against him, blindly seek- ing his lips with her own.
She caught them, moving against him in a brazen kiss that she hadn’t known she was capable of. He tasted like man and desire. Cedar and spice. So delicious. She didn’t know how she’d ever get enough.
Suddenly his hands moved from her buttocks and breast to her upper arms. With a low groan, he pushed her back.
“Stop.”
She gazed at him, clawing through the haze of desire that had overcome her. “No, Simon.”
He blinked at the use of the familiar name and, from a part of her deep inside, she froze.
Reality crashed in. Forcing her frozen neck to move, she swung her head away.
“Sarah, look at me.” He cupped her hands in his palms, and warmth instantly flushed through her, combating the cold.
“I... Sarah, I want you. But I don’t want to hurt you. I’m not the kind of man who... uses women.”
“I know you’re not.” One of the reasons she adored him.
“So you see why we can’t, why I can’t... ?”
“I’m not a fool, Your Grace,” she said softly. Sarah knew that no matter what happened between them, no matter what power he had over her, Simon would never take advantage of her. “I know what I am doing. What I want.”
Simon flinched. “I don’t want to ruin you.”
“I know,” she whispered. “But sometimes I wish you did.”
With that, and with a huge force of will, she turned and left the room. 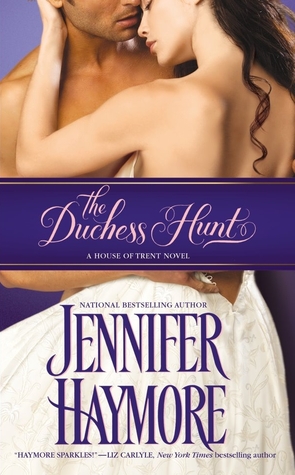 THE DUKE'S DESIRE
Simon Hawkins, duke of Trent, is no stranger to scandal. Rumors and innuendo have darkened the House of Trent for decades, and it has fallen to Simon to restore his tattered family name. He lives by a strict code of honor, but when he is called home to investigate his mother's disappearance, the distinguished duke will tangle with temptation. For there waits the only woman he has ever loved-and the last woman he should desire . . .
Sarah Osborne has spent her life dreaming of Simon's touch. But dukes do not long for lady's maids-or so Sarah believes, until a stolen kiss sparks a passion that could be her ultimate undoing. As the couple begins a forbidden romance, a cunning enemy plots to destroy the duke and everything he loves. Now, caught in a blackmailer's web, Simon faces an agonizing choice: sacrifice his family's future or break Sarah's heart. 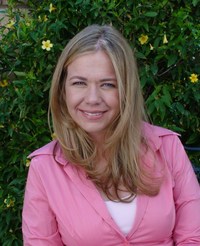 You can find Jennifer Haymore in Southern California trying to talk her husband into yet another trip to England, helping her three children with homework while brainstorming a new five-minute dinner menu, or crouched in a corner of the local bookstore writing her next novel.

Sarah, the gardener's daughter finds herself being educated along with Simon, the Earl of Trent  after he rescues her from an attacking blackberry bush.  With her mother recently deceased, the Dowager Duchess takes a shine to her and polishes her intelligence to train as a lady's maid and companion to her daughter, Esme.  As Simon and Sarah grow older, there is a real connection between the pair, although Sarah realizes that he can never marry her since she is of a lower class and he needs to marry someone more suitable.  As Simon begins his hunt for a wife, Sarah is a constant in his mind.

Of course, nothing is simple in Simon's life and his mother disappears, leaving the family to wonder what had happened to her since there is no sign of foul play.  As his hunt continues, Lady Stanley has her eye on him for her daughter, Georgina and nothing will get in her way to see them married.  When all her manipulations fail, she resorts to blackmail, claiming she knows several secrets about his family and his brothers' lineage.  Through the story, Sarah and Simon meet in secret and the unthinkable happens when Sarah finds herself in a delicate position.

This is such a sweet story that balances perfect descriptions with well thought out dialogue.  I really like Sarah and her relationships with everyone.  She has spunk but not a mean bone in her body.  The end of this didn't come quick enough for me since I really wanted to see this pair together.  Since this is the start of a new series, I can only image that each of Simon's four brothers and his sister will be given their due.  There is also just enough intrigue to keep you guessing!


Disclosure  If you are considering purchasing this book or anything else from Amazon, please use my link above since I earn a very small percentage of the sale which helps pay for shipping my giveaways!  I received this book from the publisher at no charge and in no way influenced my review.