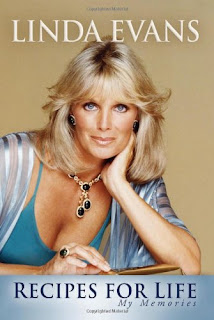 Ever since her dazzling debut as Audra on The Big Valley, Linda Evans has charmed millions of television viewers around the world with her talent, her warmth, and her beauty. Through it all, Linda has remained unaffected, grounded, and deeply spiritual.
In Recipes for Life, Linda opens up her heart, her past, and her kitchen. She shares a revealing assortment of anecdotes (magical moments mised with painful ones), photographs, and recipes enjoyed by Linda and those near and dear to her. Linda touches upon growing up, family ties, her incredible life in Hollywood, the friends she has made, and provides an intimate glimpse into her high-profile romances. At the heart of this memorable, touching, and inspiring story is how all of these ingredients have come together to make Linda the woman she is today.
True to her beloved personality, Linda warmly and candidly serves up a delightful banquet that Dynasty fans will truly savor. Complete with over 40 recipes, some handed down through generations (Mom's Hot Dog Stew), some taught by famous friends (John Wayne “The Duke's” Crab Dip), some inspired by supreme dining experiences from travels around the world (Ina Garten’s Filet of Beef Bourguignon), and still others from her winning appearance on Hell's Kitchen (Hell's Salmon), Recipes for Life is at once a delightful journey and a treasure trove of recipes of a life well-lived by a woman well-loved.

Award-winning actress LINDA EVANS has personified beauty and grace to American television viewers for over five decades, from her role as Audra Barkley on The Big Valley, to the glamorous Krystle Carrington on Dynasty, to Hell’s Kitchen, which she won in 2009 in London, England. She has won the Golden Globe Award for Best Actress in a Television Drama series and has won five People’s Choice Awards for Best Female Performer. Linda was also nominated for an Emmy Award for Outstanding Lead Actress in a Drama Series. For her contribution to the television industry, Linda has a star on the Hollywood Walk of Fame.

After Dynasty, Linda moved from Hollywood to the Pacific Northwest, where she began an extraordinary journey of self-discovery.  She has returned to performing frequently, starring in the stage play, Legends, and winning the Hell’s Kitchen competition while working under Michelin-starred chef Marco Pierre White.

Linda’s often lavish and luxurious life has rivaled Krystle Carrington’s. She has dined with queens and presidents, been romanced by the rich and famous, and today, what Linda treasures most is the wisdom she has gained along the way.

I am a memoir junkie and I love this twist that Evans gives to her latest book in this genre by including recipes that link her history with dishes she remembers.  Anyone who has ever witnessed her acting ability and grace can see the direct link from her parent who were professional ballroom dancers during the 1940's and starts off with a recipe for hot dog stew that she used to eat when money was tight.  She carries this thread through out the book by matching memories with the food she prepared.  I did learn a lot about Evans from this book like:

I think this book is best stored with your cook books since the recipes are fabulous!  I can't wait to try them all out.  My favorite recipe is the Artichoke Dip which is so easy to make and is wonderful for parties.  I like to hollow out a round of sour dough to place the dip mixture inside and use the remains of the bread to dip.  Just Wonderful!  You can find the recipe in my next post!