SHOUT OUT: University of Strangers by Bob Pfeifer 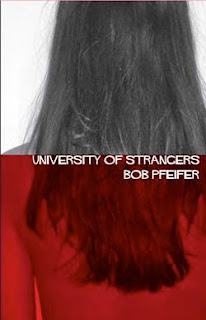 Through interviews, journal entries and news reports, the story unfolds of an underground society of international celebrities and cult figures who fight to uncover truth and banish injustice. Includes a dropcard to download five new songs by the Tabby Chinos!

Bob Pfeifer is a founding member and songwriter for the Human Switchboard and currently the band Tabby Chinos. He was a Senior Vice President A&R / Epic/Sony Records and President of Hollywood Records, where he worked with artists including Alice Cooper, Ornette Coleman and The Screaming Trees, and on soundtracks like the Crow: City of Angels and Lion King. He lives with his son in Los Angeles. University of Strangers is his first novel.

This book was just released today.  I haven't read it yet, but will in the future!

Email ThisBlogThis!Share to TwitterShare to FacebookShare to Pinterest
Labels: Bob Pfeifer, shout out