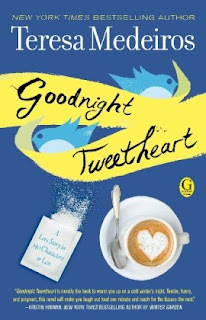 New York Times bestselling author Teresa Medeiros absolutely dazzles in this quick-witted, laugh-out-loud funny, and highly moving love story that will set readers’ hearts atwitter.
Abigail Donovan has a lot of stuff she should be doing. Namely writing her next novel. A bestselling author who is still recovering from a near Pulitzer Prize win and the heady success that follows Oprah’s stamp of approval, she is stuck at Chapter Five and losing confidence daily. But when her publicist signs her up for a Twitter account, she’s intrigued. What’s all the fuss?

Taken under the wing of one of her Twitter followers, “MarkBaynard"—a quick witted, quick-typing professor on sabbatical—Abby finds it easy to put words out into the world 140 characters at a time. And once she gets a handle on tweets, retweets, direct messages, hashtags, and trends, she starts to feel unblocked in writing and in life. After all, why should she be spending hours in her apartment staring at her TweetDeck and fretting about her stalled career when Mark is out there traveling the world and living?
Or is he?

Told almost entirely in tweets and DMs, Goodnight Tweetheart is a truly modern take on a classic tale of love and loss—a Griffin and Sabine for the Twitter generation.

New York Times bestseller Teresa Medeiros wrote her first novel at the age of twenty-one, introducing readers to one of the most beloved and versatile voices in romantic fiction. She has appeared on every national bestseller list, including the New York Times, USA Today and Publishers Weekly lists. She currently has over seven million books in print and is published in over seventeen languages. She was chosen one of the "Top Ten Favorite Romance Authors" by Affaire de Coeur magazine and won the Romantic Times Reviewer's Choice Award for "Best Historical Love and Laughter". She is a seven-time Rita finalist, two-time PRISM winner, and two-time recipient of the Waldenbooks Award for bestselling fiction. Her May 2002 release, A KISS TO REMEMBER, was chosen as one of the "Top 10 Romances of the Year" by Booklist magazine, the official publication of the American Library Association, while ONE NIGHT OF SCANDAL, her August 2003 release, won the Romantic Times Reviewer's Choice Award for Best Historical Romance of 2003.
Teresa is a charter member of the Romance Writers of America Honor Roll, Kentucky Romance Writers, and Novelists, Inc. She lives in Kentucky with her husband and her cats Willow and Buffy the Mouse Slayer.

Finally, You've Got Mail updated for the 21st century.  I knew someone had to do a twitter book and I was  thrilled that the first one I read was pitch perfect.  Yes, this will be the romantic twitter book that all others will be judged by in my little world.  I can totally see this one as a movie.  You will have to have a bit of twitter-ese to understand parts of the book.  Medeiros does a great job of working in those details.

The witty, little bon mots are what I live for in a book like this.  Abby and Mark come across as real people even though you only get a bit about Mark from his writing and Abby's theories about him.  Of course, the book is a condensed version of a normal romance, but the emotion, word play and appeal are all there.
Of course, there is a bit of a twist at the end, which was nicely done and kept the story from becoming entirely predictable and too sweet.