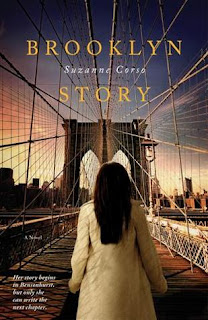 To me, some people lived in the real world and others lived Brooklyn. . . .It’s the summer of 1978, and Samantha Bonti is fifteen years old, half Jewish and half Italian, and hesitantly edging toward pure Brooklyn, even if her dreams of something more are bigger than the neighborhood girls’ teased hair. She lives in Bensonhurst with her mother, Joan, a woman abandoned and scarred in a ruinous marriage, poisoned with cynicism, and shackled by addictions; and with her Grandma Ruth, Samantha’s loudest and most opinionated source of encouragement. As flawed as they are, they are family.
Samantha’s best friend is Janice Caputo, a girl who understands, as well as Samantha does, this close-knit community of ancestors and traditions that stand like roadblocks, this insular overcrowded little world of controlling mobsters who mold their women like Jell-O; and of the wannabes, the charismatic young guys who are willing to engage in anything illegal to get a shot at playing with the big boys. Yet, Samantha has something Janice doesn’t—a desire to become a writer and to escape the destiny that is assumed for all of them in the outer reaches of Bensonhurst. And it’s to be had just across the Brooklyn Bridge.
Then comes Tony Kroon.
Older than Samantha, Tony is a blonde-haired, blue-eyed, half-Sicilian, half-Dutch mobster wannabe. A Bensonhurst Adonis. Taken in by his adoring attention, and empathetic to Tony’s own struggles with identity, Samantha is falling in love, even when she’s warned never to ask imprudent questions of Tony’s life. Even when her family and friends warn her to stay away. Even when Samantha knows she’s too smart to fall this deep . . . but the last thing she wants is the first thing to happen. Unable to resist Tony’s seductive charms, Samantha soon finds herself swallowed up by dangerous circumstances that threaten to jeopardize more than her dreams. Grandma Ruth’s advice: Samantha had better write herself out this story and into a new one, fast.
Told from the adult perspective, this is a powerful, true-to-life novel of leaving the past to history and the future to fate—of restoring hope where there was none, and reaching for dreams in an inspiring promise of paradise called Manhattan.

Suzanne is the author of two feature film screenplays, has produced two documentaries, and written one children's book. She currently lives in New York City. This is her first novel.

I adored debut authors and this one lived up to my expectations.  While reading it, I thought that this would make a wonderful movie and yes, it will be made into a movie!  Some books just really lend themselves to the big screen.  I was also interested in how the author depicts the year of 1978 and how New York becomes the goal of Samantha and how it represents "making it".  There is lots of angst and drama that keep with the time period.  It reminded me a bit of Boardwalk Empire as well.