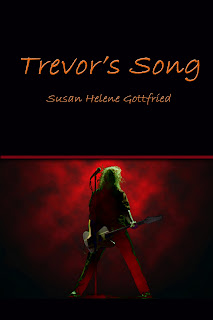 I want to thank Susan for stopping by BookHounds and answering my silly questions.  Some of you may know that I post on Win A Book over at Susan's site, WEST OF MARS.  I have been reading Susan's posts for a long time now and have really enjoyed her wonderful stories about her fictional metal band, Shapeshifter.


1. Sex, Drugs or Rock and Roll? Pick one.
Oh, Rock and Roll, of course. You can do sex or drugs (or both) while rocking out, and then you CAN have it all.

2. My book should be read while drinking a glass of …
Glass? Glass? What is this glass you speak thereof, unless you mean the thing that best holds beer?

3. My book is best read while listening to ….
Music, of course. ShapeShifter is a metal band, but ever since hair metal came along, the definition of what is truly metal is up for debate and/or interpretation. So if you want to envision ShapeShifter as a Poison knock-off, go for it. Bret's pretty sexy. Or if you're thinking Mitchell has more in common with the dudes in Vomitory, I won't correct you. I may not understand since I don't particularly like Vomitory, but hey. It takes all kinds to rock the world.

4. The stories in my book are inspired by real or imagined events?
Entirely imagined, no matter how real Trevor actually seems. Helping build that reality is my own background working in the music business. I've done pretty much every job there is except that of performer. Retail, promotions, radio, print media, crew... yep, I've done it.

5. My personal theme song is…
Tesla's Little Suzy, of course. Or Brown-Eyed Girl, Van Morrison's classic.
Or did you mean in a less literal sense? Hmm. You name it, I can probably pull a line out and make it my mantra. I particularly like Metallica's Damage, Inc: "Fuck it all and no regrets." Or was that St. Anger? Hit the Lights? Hmm.
You fellow Metallica fans can quit rolling your eyes at me now. If Hetfield can play with words, so can I. At least I haven't written three songs with the same title.
Aww, hell. I have two books -- and a third on the way! -- with the same title.
Clearly, I have Hetfield-itis. Is there an intervention for this? And if so, can you get it to me fairly quickly?


6. If I were a rock star, I would be …
Smoking large amounts of crack. Seriously. Refer back to Question #4. I've done everything BUT be a performer. There's a reason, and it's not because I'm afraid of the spotlight (I eat it up just like Trevor does). It's because I find it so much more intriguing to be part of the behind-the-scenes stuff that makes the magic happen. When I was set to go work at a record label, that was my motivation. I wanted to know I was the one responsible for what was happening onstage.

8. Favorite band member (lead singer, drummer, …)?
Phil Collins and Neil Peart are some damn cool drummers. Axl could be one of the best frontmen of all time, if he weren't so batshit crazy. Hetfield's got a large corner of his own, too. And Sully, of Godsmack? Man, HE has got the hot frontman thing DOWN. Yikes. And of course, Newsted on bass, although I don't know many bass players. I'm picking Newsted 'cause I've rarely seen a more photogenic man and maybe mentioning him here will result in someone coming here on a Google search and then buying my books. I love Slash's guitar sound, and then there's... wait. There's more interview to do yet. Best to move on.
As a non-musician, my eye tends to linger on the frontman. Go figure. He's the dude singing.
Hey, notice how I'm mentioning all men? No disrespect to the amazing women in rock, and there are a ton right now (Maria Brink, Lacey from Flyleaf, that Gaga chick). This is what happens when you ask a heterosexual woman about her preferences.

9. Favorite road food?
Yikes. In a restaurant, it's chili and a side salad. On the bus? Gotta be the Hostess: Twinkies, cupcakes, fruit pies. Backstage? Definitely NOT the deli tray. Ick. And what's with the cheese tray? Why would anyone clog up the works before hitting the stage? It makes no sense.

10. I can’t live without…
Music. Writing books. Bringing these two passions of mine together.


11. Most embarrassing song on my iPod is ….
Yeah, okay. I am SO not falling for this one. Know why? Then I'd have to own the embarrassment and, maybe even worse, listen to everyone go, "What's so embarrasing about THAT? I happen to LIKE the Safety Dance."
Which is NOT on my iPod, by the way. I need a shower just thinking of that gracing the playlist of my baby. My iPod effing rocks out harder than I do some days.

13. E books: Friend or foe?
Friend. I'll be a better friend when someone buys me a good e-ink reader, but I don't want that to happen until the reader meets my expectations and demands. We're not there yet.

15. What book would you most like to see made into a movie?
Oh, I've got to take the easy way out and say Trevor's Song. I'd so dig seeing that boy brought to life in style. Trevor on the silver screen... look out, Clark Gable!

16. What is next for you as an author?
The big news is the November-December push I'm doing for charity. At least 50% of my royalties will be donated to the Mr. Holland's Opus Foundation, which provides instruments for schools so their kids can learn to make music. You can donate directly and be entered into a raffle for some great books, or you can buy MY books and ... get books.
Books make great Christmas gifts, you know. You can even order print copies directly from me and tell me who to autograph them to. Way better than letting your loved one think you walked into a bookstore and grabbed the first thing you saw.
And since I mentioned it above, yes, there will be a Demo Tapes: Year 3. These short story collections are popular among my groupies -- that's a fan to most everyone else, except Facebook, who calls them Likes -- so I'll be doing more of them.

17. Do you have a favorite place to write?
Ummm.... in my head. If I could get as much written on a page as I do in my head, I would have way more than three books on the shelves now. Or maybe I'd have way more drafts that need to be edited.
Yeah, probably that last one. But you gotta start somewhere, and getting through the first draft is a killer for many writers. Not me. The killer is being near a computer when inspiration strikes.

18. Are you reading anything good right now?
Yep. There's a Jonathan Kellerman book on my nightstand, and I'm working on RJ McDonnell's Rock and Roll Rip-Off. I'll be posting a review of it on one of my blogs once I'm done reading.

19. What is the last thing you Googled?
The name of the lead singer of Vomitory, then decided I didn't need to prove they're a real band. They really are. I promise. I could NOT make up a band name like THAT.

20. What makes you cringe?
Umm... bands named Vomitory? Actually, Rammstein. They make me cringe ever since their last album. We won't discuss that. You can go let it be the last thing YOU Google. And then come back here and click through and buy my books. The more I sell, the bigger the donation to charity will be! And c'mon. We may be rockin' it this month, but that doesn't mean rockers don't dig kids. Without kids, who'll buy the t-shirts and come to the shows and download all the music?
at 2:18 PM