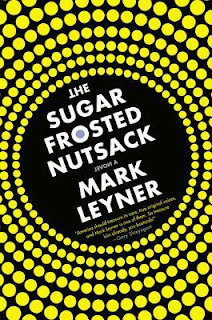 Publication Date: March 26, 2012
High above the bustling streets of Dubai, in the world's tallest and most luxurious skyscraper, reside the gods and goddesses of the modern world. Since they emerged 14 billion years ago from a bus blaring a tune remarkably similar to the Mister Softee jingle, they've wreaked mischief and havoc on mankind. Unable to control their jealousies, the gods have splintered into several factions, led by the immortal enemies XOXO, Shanice, La Felina, Fast-Cooking Ali, and Mogul Magoo. Ike Karton, an unemployed butcher from New Jersey, is their current obsession.

Ritualistically recited by a cast of drug-addled bards, THE SUGAR FROSTED NUTSACK is Ike's epic story. A raucous tale of gods and men confronting lust, ambition, death, and the eternal verities, it is a wildly fun, wickedly fast gambol through the unmapped corridors of the imagination.

Mark Leyner is the author of the novels My Cousin, My Gastroenterologist, Et Tu, Babe and The Tetherballs of Bougainville. His nonfiction includes the #1 New York Times bestseller, Why Do Men Have Nipples? He cowrote the movie War, Inc. and lives in Hoboken, New Jersey.

SOURCE: PUBLISHER
MY THOUGHTS
LOVED IT

This is a story that is probably the weirdest thing I have ever read.  A bunch of gods got together, sat around high on super Ecstasy called *gravy* and planned the world as we know it.  It is also the story of Ike, a guy who ends up connected to these gods for their own amusement.  Ike likes to relive a story called "TSFN"* which is in essence an ode to the gods or at least that is what I think it is about.  I really felt like I was watching Ground Hog Day over and over where the same thing happens again and again.  Or if you are more a more adventurist type, then this is like "The Aristocrat" joke made famous by Gilbert Gottfried.  It is different characters telling the same story but with different takes on the theme.  There is a lot of language.  Lots of words.  Lots of gods I really wished existed.  I mean, I think I even read about one that was the god of body hair.

I have read other books by the author and his most accessible book is probably "Why Do Men Have Nipples?"  and although that is non fiction, it still contains his witty use of words like this one.  I think you might need to have a drink or two to really enjoy this one.  I have to admit that this story is probably more exciting than a butcher in New Jersey deserves.  And when that story is elevated to Shakespearean level by everyone reciting the "TSFN" , well, you can only imagine the extremeness of this story.  Not for the feint of heart, but if you enjoy excellent sentence construction, then this is your book.

WANT TO WIN A COPY OF THIS BOOK? Complete the below form

Contest is open to anyone over 13 years old with a US or Canadian mailing address
(sorry, no PO Boxes)
Contest ends on 5.11.12 Winner will be chosen by Random.org on 5.12.12
Winner will have 48 hours to respond to email or a new winner will be chosen.
This giveaway is sponsored by LITTLE BROWN  and THREE copies are available.