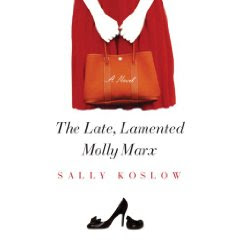 The Late, Lamented Molly Marx: A Novel by Sally Koslow

Product Description
A smart, entertaining, and heartfelt novel about a woman coming to terms with decisions she can never reverse

Molly Marx led an enviable life—until she was found dead along the bank of the Hudson River. A young wife and mother, Molly now finds herself in The Duration, where, with the help of a refreshingly unorthodox guide, she can observe the friends and family she left behind: her plastic surgeon husband who even in mourning can’t control his wandering eye, the handsome colleague she found irresistible, a fiercely competitive twin sister, her controlling mother-in-law, a loyal but confused friend, and—most important—her purest love, a three-year-old daughter. As Molly watches them try to untangle the events leading to her mysterious end, she relives her past and learns the fates of those she cherished most (and least).

Exploring marriage, fidelity, friendship, family, and mortality, The Late, Lamented Molly Marx is a playful yet tender love story about a flawed but charming woman, forced—better late than never—to take responsibility for the choices in her complicated life.

I can't gush enough about this book! This is going to be the perfect book for this summer. The only issue I had with the story was that you aren't specifically told "whodunit"! I think it is an easy guess though.
at 6:21 PM